Canister filters are like the Rolls Royce of the tank cleaning world. That may be a slight exaggeration, but the point is that canister filters do a fantastic job of keeping your water clean. Out of all your options, some shine brighter than others.

From this Fluval FX6 canister filter review, you’ll learn when and where this filter stands out, when you want to avoid it, and what makes it unique. If you’re tossing up different options right now, keep reading. 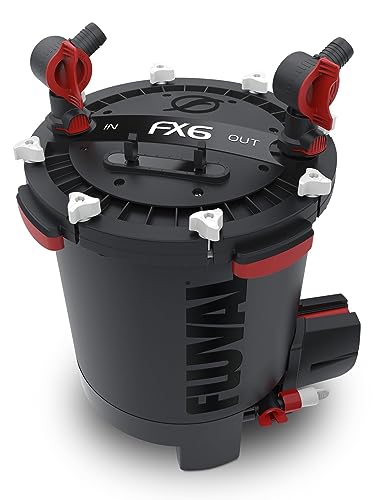 This large filter is rated for tanks up to around 400 gallons. It has a strong flow rate with a long-lasting, durable pump motor. You’re likely to get years of good use from the product because of the sturdy build and thick plastic materials.

Every month, a maintenance reminder alerts you that it’s time to clean the filter and maintain the mechanical media. This is an energy-efficient filter that runs quietly. Telescopic nozzles on top make setup simple.

As the next step up from the Fluval 406, the FX6 adds more power with most of the same benefits. If you’ve already had a 406 or one of the other smaller models, this won’t be too different of an experience for you.

The most obvious benefit of the Fluval FX6 is its sheer power. This filter’s pump is strong enough to handle all kinds of waste in very large aquariums. It also carries an enormous amount of filtration media compared to many other canister filters.

With the large media capacity, this filter keeps you from doing maintenance all the time. You don’t need to clean it as often and you won’t have to change the media very much to keep up with the tank. You also have the ability to put a larger amount of biological media to help with positive tank cycling.

With its powerful pump and large capacity, this canister also comes with a large size. Here are the dimensions: 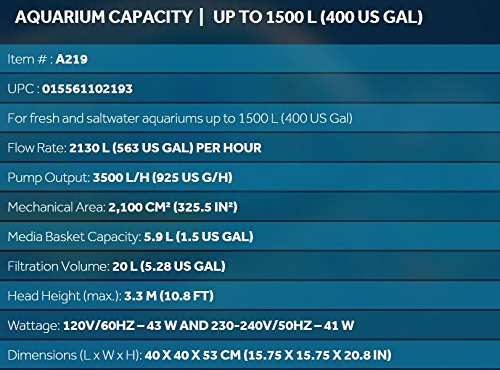 The Fluval FX6 is Meant for…

The short answer is that the FX6 is recommended for tanks up to 400 gallons. But, there’s a bit more to it than that…

It’s a large filter meant for large tanks. Anything from 80 gallons to around 300-400 gallons can benefit a lot from a Fluval FX6 filter. It doesn’t matter if you’ve got a freshwater or saltwater tank.

Reef tanks tend to produce more waste than regular saltwater tanks, so 400 gallons may be a bit of a stretch. But, it keeps up with the large saltwater tanks otherwise. 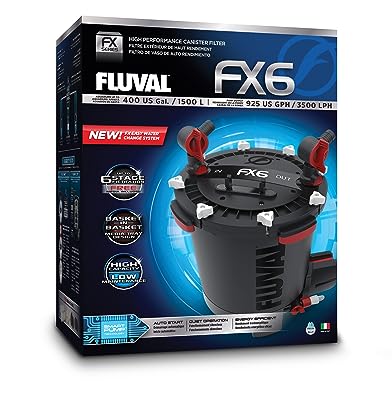 If you want to stick with the same powerful filter for years without problems or filter failure, you’ll probably be happy with the FX6. The high flow rate and dependable design make it a great fit for most large tank owners.

The Fluval FX6 is NOT Meant for…

Anyone with a sump tank or an aquarium smaller than 60 gallons.

If you’re running a sump in your tank, you can’t use a canister filter to clean the water. You need to use a filter that works inside the sump tank. While a lot of large freshwater tanks don’t use sumps, most reef tanks and larger saltwater tanks do.

The canister can work with saltwater, but not if you’re using a sump already. Even if you have a freshwater sump, you won’t be able to use this filter at all. It’s not compatible with a protein skimmer.

Smaller tanks are also probably a bad fit for the FX6. It’s a very large, powerful filter. It can easily handle the mess from a smaller tank, but it could actually overpower the aquarium.

Overpowering won’t ruin your tank, but it could injure your fish and create a very strong water current that will make it difficult to keep tank life happy. Some fish like strong currents, but most don’t.

The multi-directional output nozzle helps lessen the problem a little bit. However, it’s not enough for all smaller tanks, especially those under 60 gallons. You wouldn’t want to use this in a betta tank, even if it’s a larger betta tank, because bettas don’t like strong water flow.

Getting It Set Up

So, you’ve bought a large tank and you’re already dreaming of what you’re going to stock it with. Or, you’ve had your tank set up for a while and you want to replace the filter with something a bit more reliable. Whatever your story is, you’ll make it happen pretty easily with the FX6.

When it comes to setup, this is a simple canister filter. Don’t let its large size scare you. You’ll have to put together and running within 10-15 minutes. 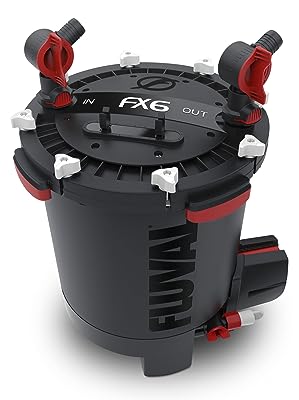 Instructions come with the filter when you order it. Follow the easy steps and allow the pump to prime itself to start. Here are a few tips for smoother setup:

Although it’s a self-priming motor, it has some difficulty starting completely dry. It’s better if you can fill it with some tank water in the filtration media area and let it do the rest.

Just as in all canister filters, the intake hose should be longer than the output hose. This helps the pump keep its airtight seal more easily.

They don’t usually have leaks, but check anyway. It’s harder to return it once you’ve gotten it all set up versus just filled it with water. Fill it completely full of water and leave it overnight. If it leaks, return it for a new one.

Remember that this is a large filter. When it’s time to clean or maintain it, you have to be able to reach it first. Once it’s full of water, it’s hard to move. So, think about that when you’re placing it.

This filter is essentially like a large bucket. Once you fill it, it gets very heavy. Don’t put media or water into the filter until it’s already in its final location.

What’s In The Box?

When you get the filter, it comes with everything you need to set it up. This includes two water hoses, valves, 3 filter media baskets, all the filter media you need (3 different types), and a few other extra accessories.

Fluval provides a 3-year limited manufacturers’ warranty. If you break it from misuse, you won’t be able to get it replaced. But, if it fails on its own, Fluval honors the warranty to correct the issue. The warranty doesn’t apply to small parts like the impeller that can naturally wear down over time.

From this Fluval FX6 canister filter review, you’ll see there’s a definite market for this filter. It’s not the best choice for smaller tanks, but it’s a powerful beast of a filter for larger tanks. Saltwater or freshwater, this Fluval handles it all.

If you’re looking for a very strong filter that holds an enormous amount of filtration media, this is a great candidate. It’s low-maintenance, quiet, and energy-efficient without sacrificing on ability.